The Design of Caesar

Caesar is the secondary main character of the story, a real sweetheart and a bit of a shy fellow who is trying to pursue his dreams in a work environment that feels alien to him. There was a lot of unique problem solving involved for his design, so let's get into it!

Caesar is a lycamorph who has his debut in Invisible Seams – I had drawn these anthro characters for previous games before, but since Invisible Seams puts greater focus on this species, I had to ponder their visual traits more closely. How does their anatomy work, how do their proportions shift when they transform into their four-legged shape, and how would this logically impact their regular clothing? What fur patterns do they sport? It was a lot to figure out. 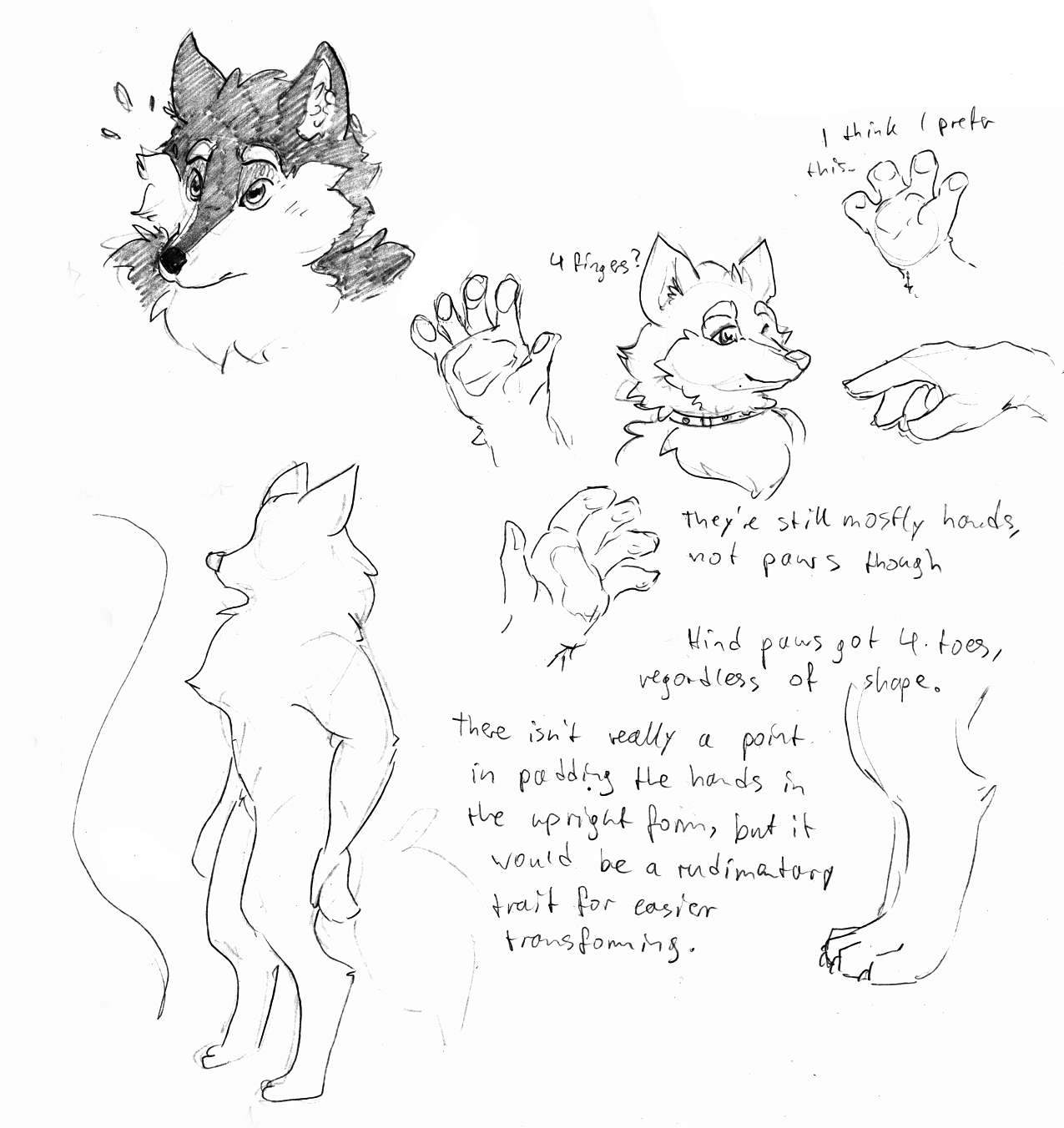 I ended up doing plenty of photo studies of wolves and dogs (especially huskies and German shepherds), since I didn't just want to copy the abstract style of some other furry artist. I had actually drawn quite a few anthro characters in my personal art before, so I thought I was perfectly ready to showcase one as a main character in a VN – buuut it ended up being much more challenging to me than I expected. What I probably struggled with most were the different head angles for Caesar, since a face with a snout is constructed so differently from a human head. 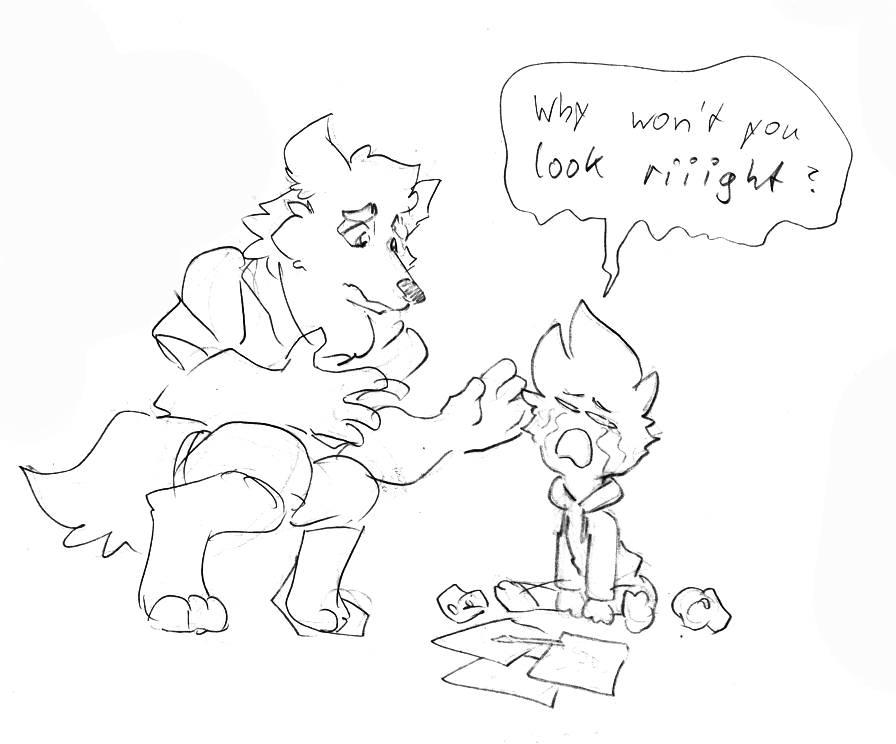 Having certain tools at my disposal was a big help: Again, photo studies are always useful, and I also found a nifty 3D model of a low-poly wolf to see how the planes of the face look at different angles.

It took a bunch of trial and error and iteration until I eventually arrived at something I was satisfied with. It's not perfect, but it's as good a result as I could achieve with my current skill level. I guess the moral of the story is; Don't underestimate furry artists! This stuff is pretty hard. 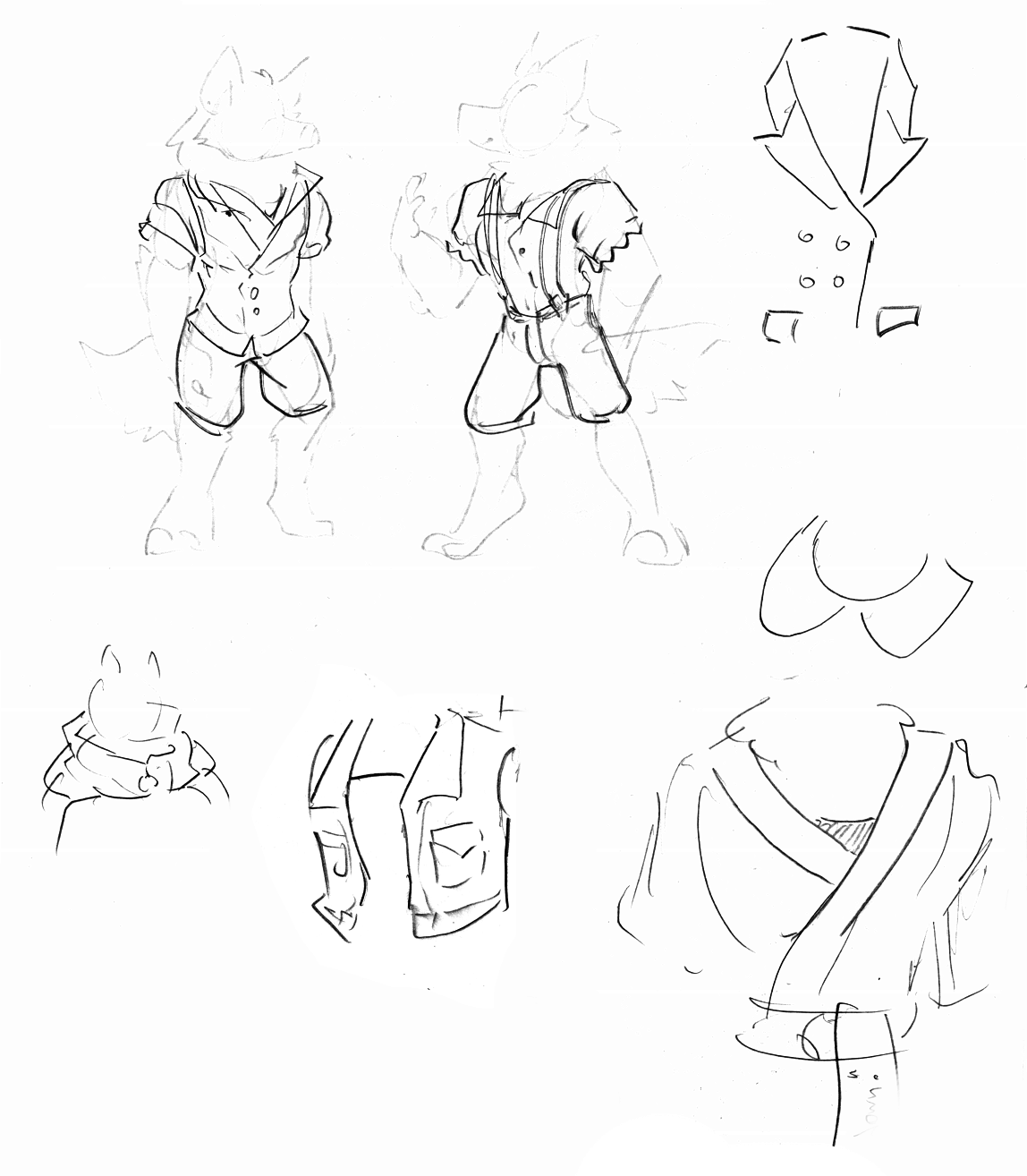 A wolf in sleek clothing

Figuring out Caesar's outfits was a relatively easy task in comparison. He wants to fit in with fairies and their fashion styles, so he is wearing shirt-and-vest combos just like Moth does. I went with a double-breasted vest for his main outfit, since I find that it looks best on broad builds like his. 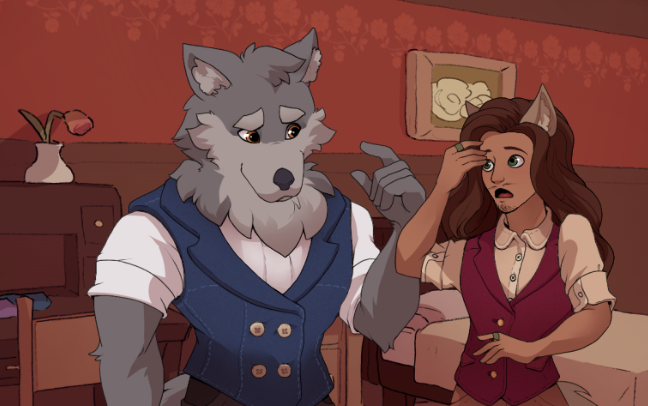 Caesar features splashes of blue and yellow in his style because those are the colours he can distinguish most clearly with his canine eye sight, and thus they offer the sharpest contrast to him. It's also why Moth mistakes him for a Guild member when they first meet. 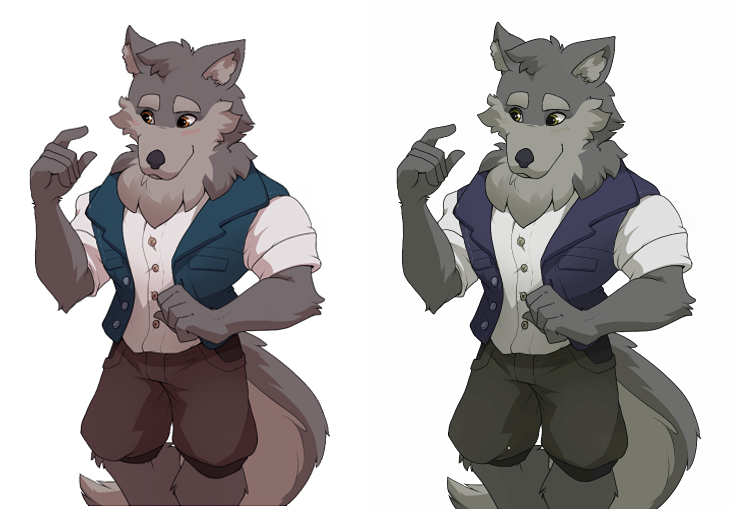 On a superficial level, there are quite a few parallels between Caesar and Jasper, the antagonist of the story: Both wear blue and yellow, both are the youngest siblings in their family and are used to taking care of their nephews, both have a piece of waltz music as their associated theme when we first meet them. However, the way they treat people is as different as night and day. Caesar is a gentle giant who is very careful not to hurt anyone's feelings, to the point where he has trouble standing up for himself when he is being treated unfairly.

I tried my best to bring this gentle quality across in his expressions and gestures, and I had fun figuring out his body language in each scene. Sometimes when he chooses not to express his feelings outright, his drooping ears or wagging tail still give something away, and it's a signal that both Moth and the player can catch on to. Hopefully, even though Caesar doesn't have voice lines in the game, readers can guess how softspoken he is in nature.

In the next dev log, we will take a look at the design for Moth, our sweetheart protagonist. See you then! 🌻

Just for my curiosity:
Would Caesar have had it easier with the thick cloth of the flap trousers than Moth?

Perhaps! I could imagine that Caesar has more grip strength, so he has an easier time sewing through thick fabrics. Not that this knowledge would have kept Moth from insisting to sew the trousers, since it was a personal project to him XD